Surgical excision is recommended for symptomatic leiomyomas and those greater than 5 cm. Asymptomatic or smaller lesions should be followed periodically with barium swallow.

Resection is the only way to confirm that a tumor is not malignant. Periodic follow-up of smaller lesions is recommended because leiomyomas have a characteristic radiographic appearance, slow growth rate, and low risk of malignant degeneration. Tumors of the middle third of the esophagus are approached using a right thoracotomy; tumors in the distal third of the esophagus are resected through a left thoracotomy.

The outer esophageal muscle is gently incised longitudinally in order to reveal the lesion. Careful dissection is performed to separate and remove the leiomyoma from the underlying submucosa.

If the mucosa has been opened during dissection, the underlying mucosa is reapproximated, followed by closure of the longitudinal muscle. Some authors have shown that large extramucosal defects may be left open without subsequent complications developing.

Segmental esophageal resection may be indicated for giant leiomyomas of the cardia.

While open surgical technique is the traditional mainstay of therapy for leiomyomas, combined esophagoscopy and video-assisted resection (thoracoscopy) or laparoscopic transhiatal resection are being increasingly performed.

Endoscopic removal of these tumors has been attempted, but this technique cannot be considered standard of care.

However, a retrospective study by Wang el al indicated that endoscopic submucosal tunnel dissection (ESTD) is a safe and effective treatment for esophageal leiomyoma and that it has advantages over endoscopic submucosal dissection (ESD). The study involved 39 patients who underwent resection for leiomyoma, either by ESTD or ESD. Compared with ESD, ESTD was associated with shorter operating times, hospital stays, and time needed for incision healing. Moreover, the ETSD and ESD groups showed no significant difference in the incidence of complications. 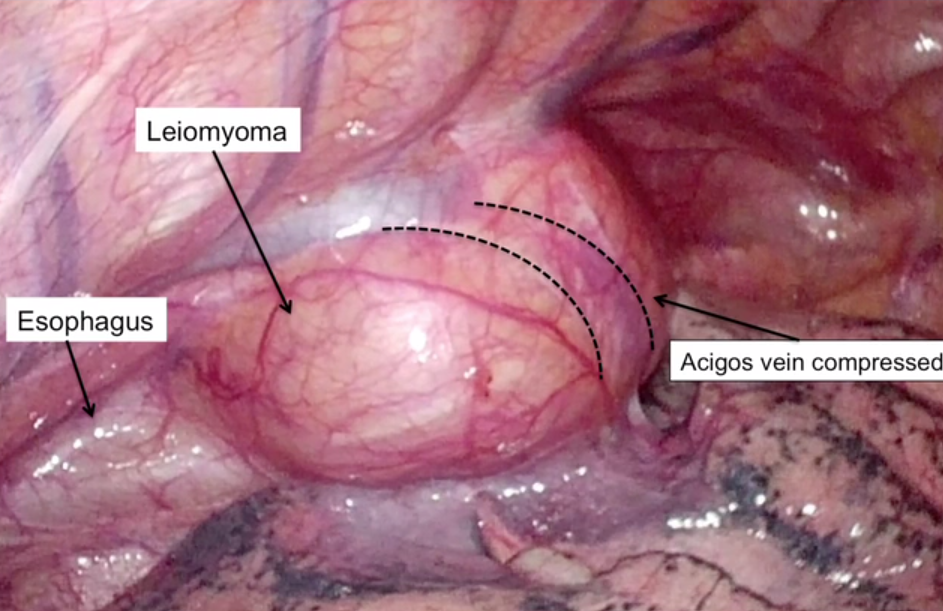