P.P.H. is also commonly referred to as a stapled hemorrhoidectomy, stapled hemorrhoidopexy or circumferential mucosectomy. This treatment option is the most commonly used surgical remedy for third-degree hemorrhoids.  P.P.H. may also be used in cases where medical management has failed in stage two diseases, and is also used in stage four diseases.  Unlike a traditional hemorrhoidectomy, P.P.H. does not remove the entire hemorrhoid.  Rather, this procedure removes the abnormal portion of the hemorrhoid while returning a portion of the hemorrhoid to its prior normal anatomic location within the anorectum.  It is thought that this residual replaced hemorrhoidal tissue will continue to act as a cushion for bowel movements.

Patients are advised to discontinue all medications which are considered to be blood thinners, non-steroidal anti-inflammatory pain medications, certain herbs and aspirin-containing compounds eight days prior to the procedure.  It is mandatory that patients discuss all medications with their physician prior to undergoing a P.P.H.

The procedure requires between 30 to 45 minutes to perform, and is associated with less postoperative discomfort when compared to a traditional hemorrhoidectomy.  Patients are usually able to return to work or other activities of daily living much sooner compared with a traditional operation. 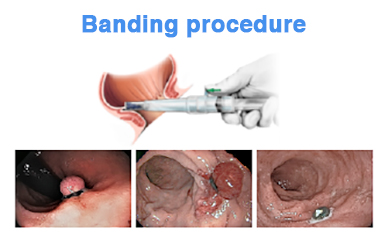